Latest updates from the campaign:

Krasner refused to debate Chuck Peruto before the Nov. 2 general election, taking a two-day, circuitous path to acknowledging the snub.

Please tune in tomorrow morning, Wednesday, September 8, 2021, @ 8:30 a.m., for the Chris Stigall show on Philadelphia's AM Station 990, The Answer, as Mr. Peruto will be a guest explaining why he is the better candidate for Philadelphia District Attorney.

Chuck Peruto says that Larry Krasner refuses to debate him.
Why won't Krasner debate his Republican opponent before the Nov. 2nd election for D.A.?
"He's a coward," Peruto said. But in February, when he first got into the race, Peruto says, he predicted that Krasner wouldn't debate him one-on-one. Why not? Because "I would slaughter him," Peruto said last week. "He [Krasner] needs to come down from his ivory tower and answer questions that deal with public safety that the public has a right to know about."
Thursday, August 26, 2021 12:41 PM

The market is here because it is highly convenient for so many to contain the problem here, far away from affluent, white areas whose residents have historically driven in to buy drugs, use them, and leave. And my Black and brown neighbors have been told, both implicitly and explicitly, that the accompanying violence and community destruction inherent in open-air drug markets is their burden to bear, and that the wellbeing of themselves and their families simply don’t matter.

The containment of this problem in Kensington demonstrates the systematic racism that plagues our city, and we must reject any argument to preserve this racist status quo.

Last week, the Philadelphia Inquirer's Editorial Board called attention to the disturbing fact that since Jan. 2, not a day has gone by without someone in Philadelphia being struck by a bullet.

Yet when Mayor Jim Kenney or District Attorney Larry Krasner talk about the city’s epidemic of gun violence, it’s difficult not to come away with the impression that they believe they are the greatest victims of this crisis. It’s long past time for the mayor and the district attorney to stop making the city’s crisis about themselves.

Both men have form when it comes to recasting the narrative around violence in the city to place themselves at the center. Whenever Philadelphians have demanded answers on promised programs — such as increased street sweeping, repainting driving lanes on Washington Avenue, or hiring unarmed traffic enforcement officers — the Kenney administration attributes any stalled progress to the COVID-19 pandemic.

For his part, Krasner appears to lack a working relationship with practically every other major figure in law enforcement. Whether it is conservatives like former U.S. Attorney Bill McSwain, moderates like the state’s Attorney General Josh Shapiro, or even fellow progressives like Delaware County District Attorney Jack Stollsteimer, Krasner seems either incapable or unwilling to forge even the kind of rudimentary ties that ease interagency cooperation and foster a spirit of public service. Too often, it seems, Krasner casts what are apparently good-faith policy disagreements as indictments of another party’s character.

Several Philadelphia city councilmembers visited Chester on Tuesday to learn about how government and law enforcement officials there have worked hand-in-hand to reduce gun violence in 2021.

But the scripted event seemed to go off course, highlighting the dysfunction and dissension among the Philadelphia leaders expected to address the epidemic that is claiming a record number of lives this year.

And by the end of the day, the city’s mayor and district attorney were trading insults with each other.

What began as an event aiming to inspire a path forward during a record-breaking stretch of violence instead served to expose the deep fissures among city leaders tasked with addressing it. And left in its wake were questions about how the type of strategy touted by officials in Chester — which relies on collaboration among different agencies — could succeed in the fractious environment on display in Philadelphia.

The city of Philadelphia used to have a limit on annual donations that a political action committee could make to a local candidate. But not any more.
Thanks to the dark alliance between D.A. Larry Krasner and the Real Justice PAC of San Francisco, Philadelphia's local campaign finance laws apparently are no longer in effect. At present, there also appears to be no legal limit on how much money a PAC can drop on a local election here in Philadelphia.
Krasner, the city's top law enforcement officer, and the Real Justice PAC have a history of lawless behavior when it comes to local limits on campaign contributions.
Tuesday, August 17, 2021 9:00 AM

With the Democratic registration advantage in Philadelphia, the influx of huge amounts of outside funds, and the advantage of the incumbent, can Chuck Peruto defeat District Attorney Larry Krasner in the upcoming election?

This is a question on the minds of many people who are concerned about Philadelphia’s rising murder rate and increasing gun violence. Many city residents believe that Krasner, a former civil rights attorney who sued the Philadelphia Police Department 75 times on behalf of radical anti-cop groups, is more an advocate for criminals than for crime victims and police officers.

In passing, Peruto calls himself a “law and order” guy, which sounds strange coming from a mouthpiece whose clients include organized crime figures.

“One is my living, one is personal philosophy,” says Peruto, whose campaign slogan is “enough is enough.”

Peruto believes Krasner’s Achilles heel is his arrogance “To those who know him. To those who don’t know him, his lack of respect for the city’s citizens,” he says.

“He’s not going to budge from his agenda, even if the number becomes 1,000 homicides a year.”

Even cops who were "grilled" by Chuck, say he's the better choice!

Retired Philadelphia Police Deputy Commissioner Joseph P. Sullivan believes in the need for criminal justice reform and police reform, but he also believes that it needs to be done in a thoughtful and reasonable way.

When asked why he was supporting Chuck Peruto for DA against Larry Krasner, Sullivan said:

“What I’ve seen is a disturbing rise in violence, chaos and disorder, and this is not good for the city. I believe it is time to go in a different direction. I remember being grilled by Chuck Peruto on the stand and he is very passionate about what he does. I think he will be a moderate DA, one who will continue with reform and hold police officers accountable. When a police officer breaks the law, he will be arrested and prosecuted, but in kind, I believe Peruto will vigorously pursue violent criminals. There is a small number of people in our city that are wreaking havoc and there is an epidemic of gun violence in our city that needs to be addressed."

Death and De-Prosecution in Philadelphia - The city’s district attorney won’t fight crime even as the body count rises.

Since taking office, Krasner has pursued a policy of de-prosecution—the decision not to prosecute certain crimes regardless of whether they actually took place—as homicides have spiked. Under Krasner, Philadelphia is on track to set two city records: the lowest number of felony prosecutions in modern history and the highest number of homicides.

Candidates were asked questions on a variety of issues related to the administration of justice in Philadelphia, including questions submitted by the audience through the Zoom QA feature. Riley Ross, chairman of the Association’s Board of Governors, acted as moderator. The event was organized by the Association’s Criminal Justice Section, City Policy Committee, Civil Rights Committee, and Government and Public Service Lawyers Committee.

The Republican Zone: Voices of Change with Guest Chuck Peruto

City party chairwoman Martina White noted that homicides have increased 36 percent this year compared to 2020, when Philadelphia had 499 murders....

In a move that's sure to offend every cop in the city, District Attorney Larry Krasner's office has covered up a "Wall of Remembrance" that features plaques honoring some 200 hero cops who died in the line of duty.

Delaware Valley Journal - Could This Be The End of Krasner?

Peruto’s message is succinct and clear and avoids the grandstanding rhetoric of a social experiment: “Reduce gun violence in the city.”

Chuck Peruto Jr., top attorney from Philadelphia, joins the Dom Giordano Program to announce his candidacy in the District Attorney race, as a Republican, against incumbent Larry Krasner. First, Peruto explains why he’s willing to leave his day job to work for the public, telling that the city has gotten to such a point where he believes he has no other option. Then, Peruto explains why his experience as a criminal defense attorney would apply well to what needs to be done in the city, explaining how his experience in the field differs from current DA Krasner.

PHILADELPHIA - Philadelphia defense attorney Charles Peruto Jr. has announced he will run as a Republican against Larry Krasner in May's election for DA. Peruto says Krasner has been too soft on crime and he intends to change that if elected.

Philadelphia defense attorney Charles Peruto Jr. announced Tuesday that he is running as a Republican in the race for Philadelphia District Attorney. Peruto could pose a general election challenge to Democratic DA Larry Krasner.

PHILADELPHIA (KYW Newsradio) — A well-known defense attorney in Philadelphia has tossed his hat into the ring for the city’s district attorney.... 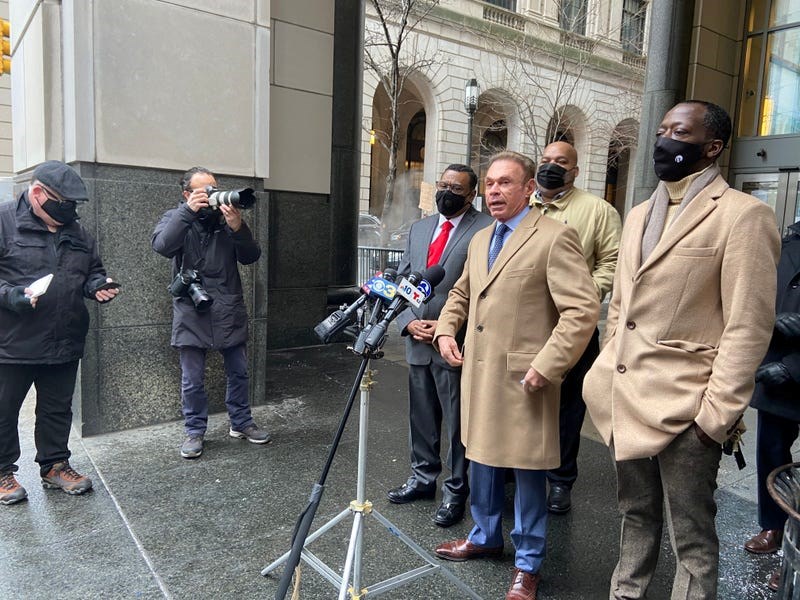 A. Charles “Chuck” Peruto Jr., a defense attorney with a flair for the flamboyant, pointed Tuesday to the revolving doors at the city’s Criminal Justice Center and said that’s how his clients view the system under District Attorney Larry Krasner....

PHILADELPHIA (WPVI) -- With a primary election just over three months away, we're getting a clearer picture of who is vying for a spot on the ballot in the race for Philadelphia district attorney.

The Lawyer who defended Joey Merlino and Hary Heidnik blames DA Larry Krasner for the city's surge in gun violence....

Philadelphia Magazine: Chuck Peruto Explains Why He Must Run Against Larry Krasner for Philly D.A.